An overview of what’s happening in policy, a critical driver for clean local energy and resilient communities.

Because policy is key to deploying DER, it’s been a major focus of the Clean Coalition since our founding in 2009. Our policy work is informed by deep technological and economic expertise, as well as our real-world experience designing and staging Community Microgrids.

Note: The legislature has suspended its current session due to COVID-19 concerns, which may affect progress on these bills.

SB 1240 calls for reviewing options for transforming the distribution grid into a more open-access platform that allows local governments and other third parties such as community choice energy agencies (CCAs), large energy users, local energy generators, and homeowners to participate more easily in grid activities. The California Energy Commission (CEC), in coordination with the California Independent System Operator (CAISO), would identify such options every two years, starting on or before 1 January 2022. The bill is meant to help increase the use of energy efficiency measures, demand response, and other load-reducing and load-managing tools, particularly during times of peak electricity demand. The bill also calls for any regulatory measures needed to facilitate third-party participation in grid operations. SB 1240 acknowledges that segmenting the grid will help increase reliability and resilience, as well as mitigating climate change.

By establishing ways for the IOUs to separate their distribution functions and assets from their other functions, SB 1240 sets the stage for both divesting the investor-owned utilities (IOUs) of their distribution assets — similar to the model the Clean Coalition has been promoting of transmission divestment — and creating a distribution system operator (DSO). As our energy generation becomes increasingly less centralized, we need more granular management of the grid at the distribution level. Expanding “third-party participation in disaster preparedness, electrical generation, storage, energy efficiency, and load management,” as this bill calls for, will pave the way to increase the safety, reliability, and resilience of the state’s electric grid.

SB 1314 would require the state’s Strategic Growth Council to develop and implement a grant program for local governments to develop community energy resilience plans, with requirements for recipients to report on grant plans and expenditures to a stakeholder review board and for that information to be posted on a publicly accessible website. The bill sets guiding principles for plan development, including equitable access to reliable energy — prioritizing critical facilities in low-income or disadvantaged communities in high-fire-threat areas most likely to experience future PSPS events, followed in priority by all other critical facilities. It also calls for integration with other existing local planning documents. The bill would require a plan to ensure that a reliable electricity supply is maintained at critical facilities and to identify areas most likely to experience a loss of electrical service.

Resilience plans are crucial to ensuring that our communities’ critical facilities remain online during any kind of grid outage, whether caused by a PSPS event or by a severe weather event or other disaster. This bill’s focus on critical facilities is aligned with the Clean Coalition’s work staging solar microgrids and Community Microgrids to support critical facilities around the state. SB 1314 is forward-looking in also calling for integration of mobile energy storage resources, which will be important components of the DER mix as transportation is increasingly electrified.

Bill status: Referred to Committees on Natural Resources & Water and Energy, Utilities, and Communications on 5 March 2020; hearing set for 14 April.

SB 1215 would create the Office of Emergency Services in the governor’s office to respond to disasters in the state. The office would support local governments through the Local Government Deenergization Event Resiliency Program as well as offering resilience grants. The Office of Emergency Services would be required to provide technical assistance to help local governments identify microgrid projects, as well as creating and maintaining a publicly accessible statewide database of critical facilities and infrastructure, specifying whether they serve high fire-threat districts or vulnerable transmission areas. IOUs would be required to file applications at the California Public Utilities Commission (CPUC) for any project that requires distribution upgrades to ensure a system is islandable (either behind the meter or a critical circuit), and IOUs would be responsible for any such upgrades. The CPUC would be required to consider these applications through a state-mandated local program that is legally binding. The bill would also require CAISO to determine a methodology to value distributed energy storage for Resource Adequacy by 31 March 2021. 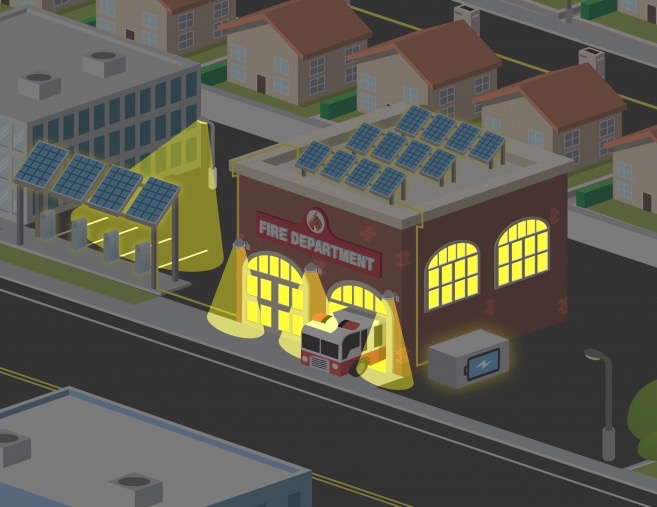 SB 1215 acknowledges that PSPS events should be a last resort, given the hardships and losses they cause for communities. By supporting the development of microgrids for critical facilities, this legislation seeks to mitigate the impact of California’s wildfire season.

Bill status: Referred to Committees on Governmental Organization and Energy, Utilities, and Communications on 5 March 2020.

AB 3021 would allow local educational agencies (school districts, county offices of education, and charter schools) to qualify for resilience grants to install energy storage systems. Projects that are financed and owned by either a local educational agency or a third party would be eligible for the grants, totaling $300 million from the General Fund for fiscal years 2020-2023. The CEC would allocate grant funding, prioritizing (in this order) community schools, schools in priority development communities in high-fire-threat areas (or areas that have experienced at least one PSPS event), schools in non-priority-development communities that match the conditions above, schools with existing solar or solar+storage systems, schools that can be used as emergency shelter sites, and educational agencies that include an energy resilience plan in the application. Priority development communities are disadvantaged communities, low-income communities, locations within half a mile of low-income communities, and enterprise zones. Grants would cover 80% of the total cost of a project, or 95% for low-income schools.

This legislation represents an important step in making the state’s communities more resilient. In our own work, the Clean Coalition is prioritizing schools as solar microgrid locations, along with other critical facilities such as fire and water departments. Schools already tend to be well-used community centers, and they often serve as emergency shelters during disasters or power outages. We are currently working with the Montecito Union School as one of the first building blocks in the Montecito Community Microgrid, which lays the foundation for the larger Goleta Load Pocket Community Microgrid (GLPCM) in Southern California. Also being staged to form a crucial part of the GLPCM is the Santa Barbara Unified School District, which is considering solar and storage microgrids for all 21 of its schools. Communities are clearly interested in prioritizing resilience in schools, and AB 3021 will support that effort.

Bill status: Referred to Committees on Education and Natural Resources on 5 March 2020.