An ambitious initiative that will serve as a model for school districts throughout the US.

An ideal location for Solar Microgrids

The Santa Barbara Unified School District (SBUSD) is located in one of the most grid-vulnerable regions in California, the Goleta Load Pocket (GLP): a 70-mile stretch of Southern California coastline from Point Conception to Lake Casitas, encompassing the cities of Goleta, Santa Barbara (including Montecito), and Carpinteria.

The GLP is completely grid-dependent, generating very little of its own power. The area gets most of its power from just one  set of transmission lines that are hung on the same transmission towers and routed through 40 miles of mountainous terrain — making the GLP highly transmission-vulnerable. The region is highly prone to wildfires, mudslides, and earthquakes.

This location provides the perfect opportunity for Solar Microgrids that will bring the community unparalleled economic, environmental, and resilience benefits.

The Clean Coalition is helping the Santa Barbara Unified School District (SBUSD) with an ambitious initiative for a massive project to stage Solar Microgrids at schools throughout the District.

In December of 2019, the SBUSD unanimously approved proceeding with this initiative with the Clean Coalition and Sage Energy Consulting. The microgrids will feature solar and energy storage that can provide long-duration resilience. The solar canopies that will be installed at school site parking lots will be staged for future deployments of electric vehicle charging infrastructure (EVCI).

Progress on the project

The Clean Coalition and Sage Energy conducted feasibility analyses for solar-driven microgrids at all 18 SBUSD sites. This was followed by designing and executing a groundbreaking request for proposal (RFP) process that resulted in September 2020 in selecting Engie Systems to build, own, and operate Solar Microgrids at 6 school sites and standalone solar at another 8 sites under a 28-year power purchase agreement (PPA). With the contracts approved unanimously on 12 January 2021, the schools will start saving money on Day 1 and will get the added resilience benefits for free.

The SBUSD is a major school district that increasingly recognizes the value-of-resilience (VOR) and has embraced the Clean Coalition’s vision to implement Solar Microgrids at a number of its key schools and other critical facilities. An extensive analysis was conducted of the feasibility of installing Solar Microgrids at these sites.

VOR123 makes it easy to see that premiums are appropriate for a microgrid configuration that yields: 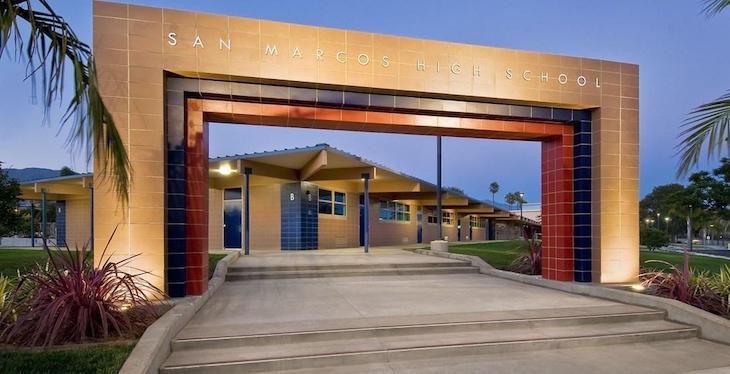 The SMHS is in the middle of the extensive SBUSD service area, in the heart of the grid-constrained Goleta Load Pocket. The area is surrounded by extreme fire risk.

The SMHS Solar Microgrid is intended to enable the school to operate independently during grid outages of any duration, with indefinite resilience for the most critical loads and resilience for all loads for significant percentages of time. 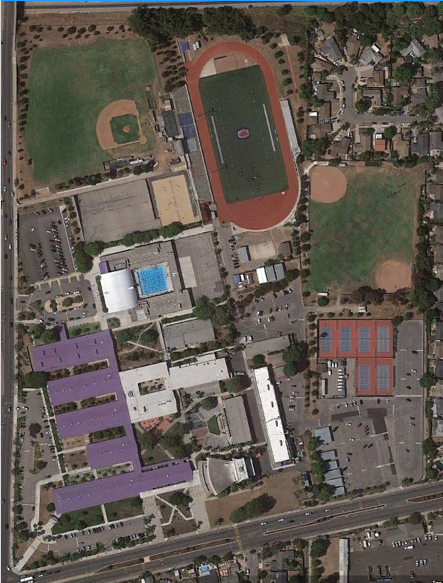 The SMHS design calls for 725 kWp of solar, entirely in the form of solar parking canopies, with Net Zero Energy (NZE) exceeded at 101%. The site will also include a battery energy storage system (BESS) of 700 kWh energy capacity and 350 kW power capacity.

The gym and nearby fields are important to the SMHS because those areas would be used for staging for disaster recovery, and potentially for sheltering. The main distribution frame is for the crucial communications system. Because of these needs, for the SMHS the Tier 1 and Tier 2 loads are almost identical in size. 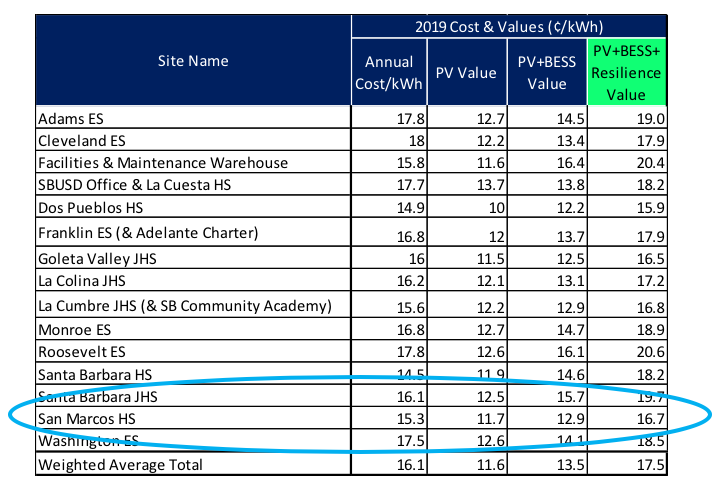 The next table shows pricing for Solar Microgrid PPAs at the sites. (Note that the RFP process resulted in even better pricing for the PPAs than is indicated by the figures here.) The green cells indicate pricing that’s lower than break-even values, including the 25% VOR123 adder. Analyses estimated PPA pricing for three Load Management configurations, assuming 25-year PPAs starting in 2020 with 3% cost escalators. Although 3% is the amount that the local utility, Southern California Edison (SCE), is assumed to raise its rates each year, that figure is conservative; SCE raised its electricity prices by about 7% in 2019 and is proposing similar increases in each of the next three years. 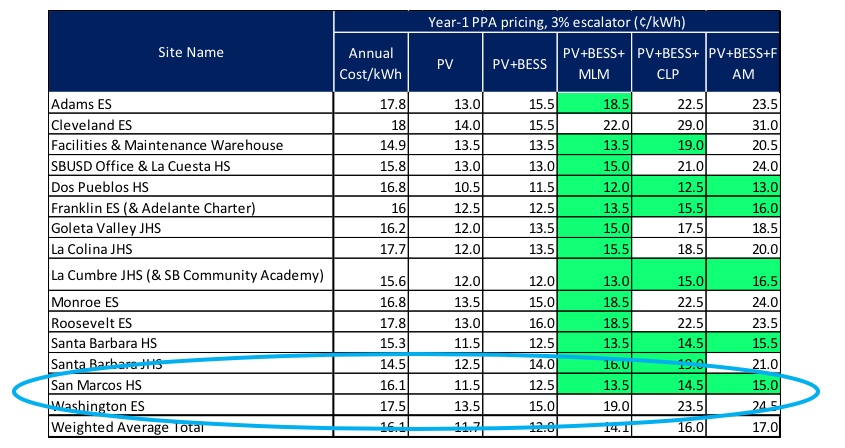 It’s important to note that the PPAs are being negotiated with no escalators. That means that the cost-effectiveness of the Solar Microgrids has improved to the point where they will make economic sense at almost all the SBUSD campuses.

Since the tables above were created, the RFP process for the SBUSD has progressed with prices coming in lower than expected — meaning that the Solar Microgrids will be an even better deal. SMHS, and the other SBUSD Solar Microgrid sites, will be saving money on Day 1 — and they will save even more when SCE increases its electricity rates.

However, the SBUSD will get indefinite renewables-driven resilience for free.

Getting paid to go green

How I'm making money by leasing an electric vehicle.

S&P Global reports on comments at a CPUC meeting citing a Clean Coalition webinar on causes of the August 2020 blackouts.

Public News Service reports on a Clean Coalition webinar that used CAISO data to shed light on the August 2020 blackouts.