Why we need a standardized value-of-resilience (VOR)

Everyone understands that there is significant value to the resilience provided by indefinite renewables-driven backup power. However, no one has yet quantified the value of this unparalleled resilience.

A value-of-resilience (VOR) standard is sorely needed, and its absence represents a significant gap in the market for Community Microgrids while learning is still in the early stages. As Microgrid Knowledge has noted, valuing resilience “is not so simple, yet may be the primary reason an organization installs a microgrid.”

At the Clean Coalition, we’ve developed a standardized VOR metric to unleash this key market. Our VOR123 methodology makes it simple to quantify VOR by standardizing VOR for three tiers of loads — critical, priority, and discretionary loads — across all facility types:

The following figure illustrates the level of resilience anticipated from a solar+storage microgrid at a facility where the Tier 1 load is 10%, Tier 2 load is 15% and Tier 3 load is 75% and where enough solar can be included onsite to net-zero the site’s annual electricity consumption. The average anticipated resilience, in terms of percentage of time online, is as follows: 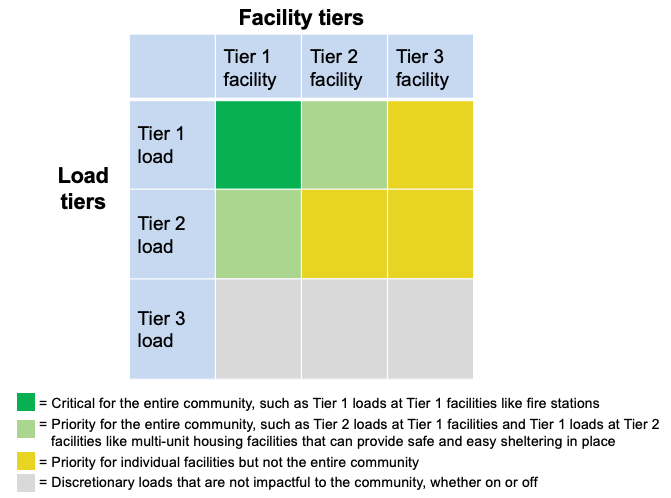 VOR123 will help everyone understand that premiums are appropriate for Community Microgrids that can provide renewables-driven backup power to critical loads indefinitely, to priority loads almost constantly, and to all loads a lot of the time.

The VOR123 methodology was referenced in July 2020 by California Public Utilities Commission (CPUC) staff in a Concept Paper submitted as part of their microgrid proceeding, which is tasked with implementing California’s SB 1339 microgrid legislation (see pp. 94 and 112 of the PDF).

Also on this page:

The Clean Coalition’s Executive Director, Craig Lewis, presented on our value-of-resilience (VOR123) methodology during this webinar hosted by the Municipal Sustainable Energy Forum on 5 November 2020.

Resilience is worth a 25% adder

The Clean Coalition has found that there are different VOR multipliers for each of the three load tiers. The following valuation ranges are typical for most sites:

Taken together, the Tier 1 and Tier 2 premiums for a standard load tiering situation yields an effective VOR of between 25% and 30%. Hence, the Clean Coalition uses 25% as the typical VOR123 adder that a site should be willing to pay, including for indefinite renewables-driven backup power to critical loads — along with renewables-driven backup for the rest of the loads for significant percentages of time.

The Clean Coalition has resolved on the general 25% premium figure after conducting numerous analytical approaches, including the following four primary methodologies:

Load management and optimizing batteries for economics and resilience

Load management is key to ensuring that a facility realizes the full value of resilience. The optimal approach for load management is the critical load panel (CLP) approach, in which a smart CLP is used to maintain Tier 1 loads indefinitely and to toggle Tier 2 loads as needed. Tier 3 loads are toggled as a group by toggling power to the main service board (MSB) and supplying power to all Tier 3 loads or none of them, depending on energy availability at any given time.

The circuit-flow diagram for the CLP approach at a Santa Barbara Unified School District high schools provides an illustration: 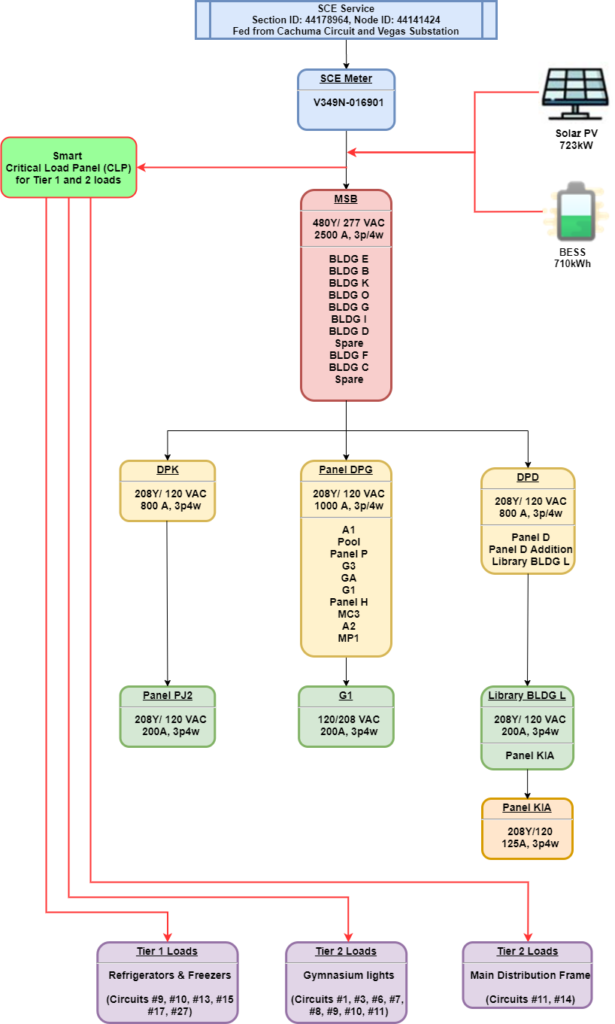 Optimizing batteries for economics and resilience is also key. For a Solar Microgrid to optimize economic performance while always being ready to provision indefinite renewables driven-backup power to critical loads, the Solar Microgrid needs to always be ready to operate in these two fundamental modes:

A site must be able to override SOCr settings to between 0% and 100% of the daily usable BESS energy capacity. For example, if preferences increase for everyday economic optimization, then the site can set lower SOCr levels. Conversely, in the face of coming storms and/or power outage warnings, the site can set higher SOCr levels to prepare for the increased likelihood of grid outages and associated energy resilience needs. 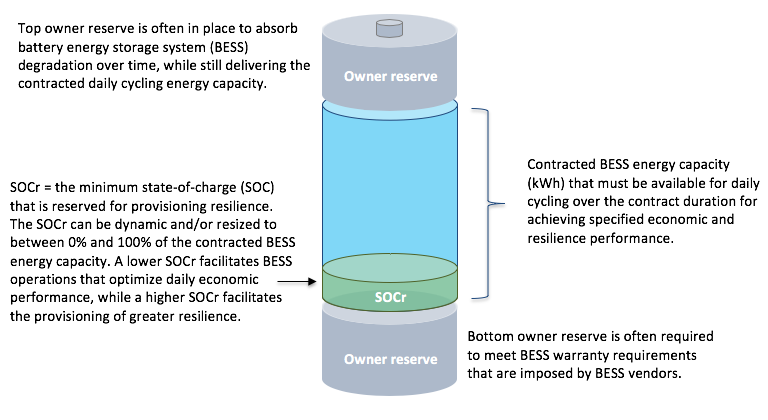 What is power system resilience?

The Clean Coalition defines resilience as the ability to keep critical loads online indefinitely in the face of extreme or damaging conditions.

This goes beyond reliability, which is measured after only 5 minutes of grid outage. Resilience is driven by renewables with energy storage and demand response, and it is focused on reducing outage duration, cost, and impact on critical services.

Critical loads are those that are life-sustaining or crucial to keep operational during a grid outage — usually about 10% of a community’s or a facility’s total electrical load.

Why we need a more resilient power system

Our centralized energy infrastructure is costly, aging, inefficient, and a highly vulnerable security risk. Extreme weather events are occurring more frequently: since 1980, the US has experienced over 280 weather and climate disasters that had overall damages/costs of at least $1 billion (adjusted to 2020 dollars) — for a total cost of $1.875 trillion. 2020 set a new record with 22 of these events.

Diesel generators and gas are not the answer

Diesel generators are heavy polluters, concentrated in densely populated areas — compounding their health risks. They require monthly testing for proper maintenance, and spew the worst pollution during this testing. They’re expensive to operate and maintain, with diesel fuel costs rising. Plus, there is generally only enough diesel fuel to maintain power backup for two days, and replenishing diesel during a major disaster is not always possible.

Gas lines are just as susceptible as power lines to ground disruptions from earthquakes and other disasters — and restoration of service for gas lines after earthquakes takes 30 times longer than restoration for electricity:

We have a better solution: Community Microgrids

What is a Community Microgrid?

A Community Microgrid is a coordinated local grid area served by one or more distribution substations and supported by high penetrations of local renewables and other distributed energy resources (DER), such as energy storage and demand response. Community Microgrids represent a new approach for designing and operating the electric grid, relying heavily on DER to achieve a more sustainable, secure, and cost-effective energy system while providing indefinite, renewables-driven backup power for prioritized loads

Providing a standard methodology that any community can use to optimize and streamline the deployment of local renewable energy.

Foodbank of Santa Barbara in process of getting solar microgrid

KEYT reports on Craig Lewis' goal of having Solar Microgrids installed at Santa Barbara Foodbank and across the County.