MENLO PARK, CA – The Clean Coalition has released a Solar Siting Survey that highlights the significant level of commercial-scale solar that may be generated within the City of San Diego. The Solar Siting Survey was conducted as part of the U.S. Department of Energy’s National Renewable Energy Laboratory (NREL) Solar Energy Innovation Network (SEIN), a collaborative effort to explore new ways solar energy can improve the affordability, reliability, and resilience of the nation’s electricity grid. The City of San Diego was one of nine teams selected to join the program, with a defined objective to ensure that 25% of the total electricity consumed throughout the City of San Diego is generated by local renewable energy sources sited within the City by 2035, when San Diego intends to be powered by 100% renewables.

The San Diego Solar Siting Survey identified approximately 500 megawatts (MWac) of technical solar siting potential for large commercial-scale solar deployments on built environments within the City. The survey pinpointed the location and estimated project sizing for over 120 prospective solar sites that could each host a solar project of at least 1 MWac. While a portion of the solar siting potential is on large rooftops, more than 75% is on parking lots and parking structures, which are often overlooked as siting opportunities for clean local energy. In total, this survey identified enough local solar capacity to fulfill the average power needs of about 500,000 homes during peak solar production hours. 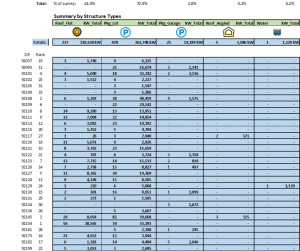 San Diego has even more commercial-scale solar siting potential than was identified in this survey, which focused on very large solar projects. If a minimum project size of 500 kilowatts (kW) were considered, instead of the 1 MW size that was set, the Clean Coalition expects that the technical solar siting potential in San Diego would increase by a factor of two to about 1 gigawatt (GW); this would approximately double again to 2 GW if projects as small as 100 kW were considered.

The Clean Coalition’s unique Solar Siting Survey methodology does more than identify viable solar siting opportunities across urban environments; it also evaluates those opportunities based on the interconnection potential of the local grid for each identified site. Solar Siting Surveys helpfacilitate the development of local solar projects, which San Diego has a tremendous opportunity to expand.

“By identifying the top commercial-scale solar siting opportunities within San Diego, this Solar Siting Survey provides property owners, developers, and policymakers a clear view of the vast potential for solar within the City, and exactly where the best opportunities exist,” said Craig Lewis, Executive Director of the Clean Coalition. “In addition, this Survey helps identify the best solar sites, thereby reducing the costs associated with developing solar and solar+storage projects.”

With over 100,000 solar installations, mostly at residential-scale, San Diego is already one of the nation’s top solar cities. But as in many U.S. cities, the potential for commercial-scale solar remains largely untapped. To unlock the potential of this underserved market segment in San Diego, the Clean Coalition will follow this Solar Siting Survey with an innovative Feed-In Tariff (FIT) that streamlines procurement opportunities for commercial-scale renewables and energy storage, greatly fulfilling core City objectives.

“The Clean Coalition’s Solar Siting Survey and FIT design are powerful tools to maximize local solar energy, delivering a trifecta of economic, environmental, and resilience benefits to communities,” added Mr. Lewis. “We are excited to help San Diego unlock the tremendous potential of commercial-scale solar and provide a model for other communities throughout California and well beyond.”

Developing the local solar projects identified in the Solar Siting Survey can help create a stronger, more resilient grid in San Diego. By pairing distributed solar with other distributed energy resources, such as energy storage, demand response, and electric vehicle charging infrastructure, the city has the potential to establish Community Microgrids, a new approach to designing and operating electricity grids and providing indefinite, renewables-driven backup power to critical facilities. Many of the large solar sites identified in this survey are prime candidates to serve as foundations for Community Microgrid.

About the Clean Coalition
The Clean Coalition is a nonprofit organization whose mission is to accelerate the transition to renewable energy and a modern grid through technical, policy, and project development expertise. The Clean Coalition drives policy innovation to remove barriers to procurement and interconnection of distributed energy resources (DER) — such as local renewables, energy storage, advanced inverters, and demand response — and we establish market mechanisms that realize the full potential of integrating these solutions. In addition to being active in numerous proceedings before state and federal agencies throughout the United States, the Clean Coalition collaborates with utilities, community choice aggregation agencies, municipalities, and other jurisdictions to create near-term deployment opportunities that prove the technical and economic viability of local renewables and other DER.


Prior to joining the Clean Coalition, Rosana was Communications Director for Sunible, an online solar marketplace, and for MyDomino, an energy savings concierge service. She has written extensively on clean energy for publications like CleanTechnica, PV Solar Report, pv magazine, and The Energy Collective. While on the steering committee of the Local Clean Energy Alliance, Rosana helped evaluate shared renewables legislation in California. She has served on the boards of several clean energy nonprofits and volunteers installing solar with GRID Alternatives.