Charging during peak solar hours will ensure your electric car is as clean as it can be — and will also help the grid.

As a Program Manager for the Clean Coalition, I recently presented at a webinar on California grants and rebates that make electric vehicles (EVs) more affordable. I based the presentation on my own experience: earlier this year, I was able to take advantage of these grants and rebates to lease a 2020 Chevy Bolt LT — and earn a net positive return of $620.

One of my main motivations for acquiring an EV was to reduce my carbon footprint. I soon realized that how I charge my EV will affect that goal. Being thoughtful about charging EVs when the electric grid is largely powered by solar energy will greatly minimize their carbon footprint while saving all ratepayers from exorbitantly expensive transmission grid upgrades that drive utility profits.

How clean are EVs?

Electricity is produced by many different sources of energy, including solar, wind, hydro, nuclear, and fossil fuels. The type and amount of emissions produced depend on the mix of electricity at any moment. Importantly, EVs are almost always cleaner to drive than gas-powered cars — and EVs get even cleaner as more renewables come online.

A recent study by David Reichmuth of the Union of Concerned Scientists (UCS) found that for 97% of people in the US, driving an EV produces fewer emissions than driving a 50 miles per gallon (MPG) gas-powered car. In fact, based on where EVs have been sold to date, the average EV in the US produces emissions equal to a 93 MPG gas-powered vehicle — but the most efficient gasoline car sold in the US gets 59 MPG, with the average at 31 MPG. A map from the UCS study shows EV emissions around the US as gasoline MPG equivalent (MPGe) for an average EV: 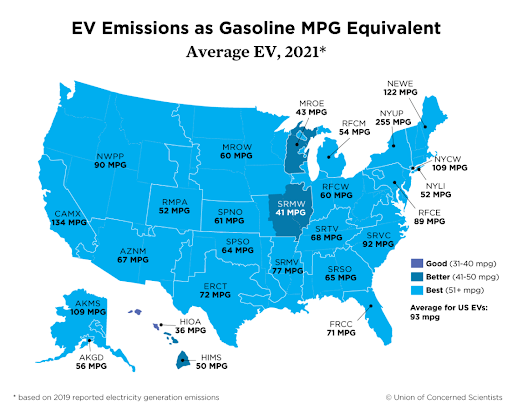 The best times to charge an EV

The electricity supply mix not only differs across the US but also varies depending on the time of day. The time when you charge your car affects your MPGe, with the least carbon emissions and highest MPGe occurring at peak solar generation times.

In California, the best time to charge an EV is between 10am and 2pm, as shown in the graphs below. This is because during these hours, solar generation in the state is peaking, minimizing California’s total CO2 emissions from energy generation. 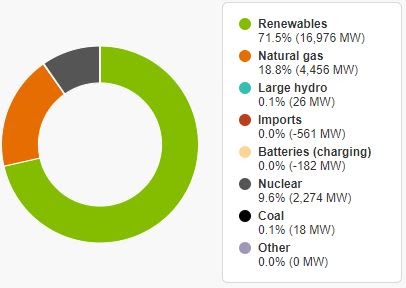 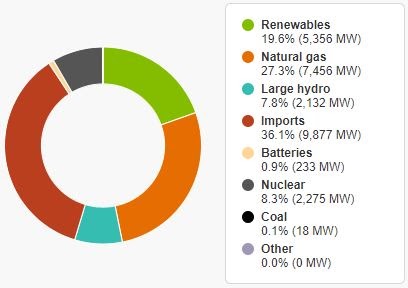 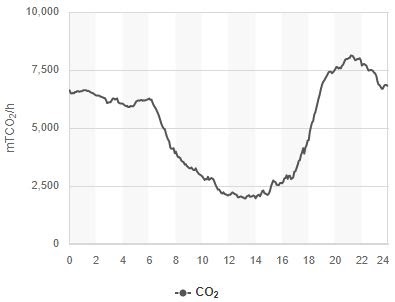 In addition, before 10am and after 2pm, California’s net demand peaks — meaning that some of the dirtiest gas peaker plants are in operation at those times and the transmission grid is at maximum congestion to meet the peak demand. Charging between 10am and 2pm will ensure the cleanest and lowest-cost energy is being used to power EVs.

With respect to how charging during the middle of the day provides benefits to the grid, broadly speaking in industry vernacular, if you charge your EV during “belly of the duck,” you can help to flatten California’s notorious “duck curve.” This curve refers to the shape of the graph showing total energy demand, which forms the top outline of the duck, and net energy demand (total energy demand minus solar and wind production), which forms the bottom outline of the duck. Solar energy generation peaks in the middle of the day, minimizing net demand. But as the sun goes down, solar energy generation drops and net energy demand goes up — and the amount of electricity that must be generated from other sources, including dirty peaker plants, increases dramatically. 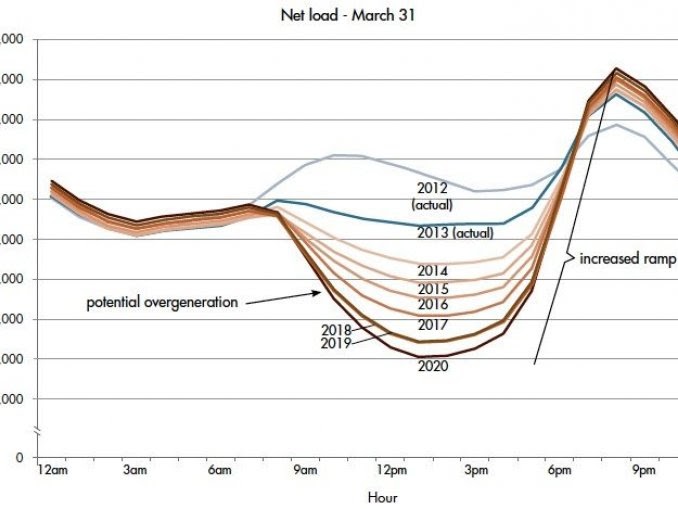 Charging EVs in the middle of the day, when solar production is peaking, helps “flatten the duck,” ensuring that the cleanest energy is used while minimizing peak energy demand during the evenings and nights.

Even the day of the week when you charge your car makes a difference. The very best times to charge are weekend daytimes, because weekend total energy demand is about 10% lower than on weekdays. This means that fewer of the dirtiest power plants are needed, because those are the last plants that are allowed to run — which in turn results in cleaner energy on weekends, based on the lower total energy demand.

These principles extend beyond EVs. All flexible loads should be targeted for daytimes, especially weekend daytimes. Beyond EVs, flexible loads include dishwashers, pool pumps, and electric dryers.

California doesn’t use all the clean energy that’s generated in the state; some of it is wasted, and a large portion of that wasted energy is solar energy due to the lack of flexibility from nuclear and fossil-based generation, as well as ineffective contracts for energy imports from other states.

But we have ways to avoid wasting solar energy. Shifting our usage to daytime hours, when solar generation is peaking, will help avoid wasting the solar energy we generate in California. Charging EVs during peak solar hours is a straightforward way to make a big difference.

The following chart shows how much solar and wind energy was unused in 2020, illustrating the enormous potential to avoid wasting clean energy by shifting EV charging to peak solar generation times. Importantly, the wasted solar represents a small percentage of the overall solar energy that is generated in California — and solar energy is generally the most cost-effective energy source available for ratepayers, even with the waste that is due to the previously noted inflexibility associated with nuclear, fossil fuels, and imports.

Unused megawatt-hours from solar and wind in California, 2020 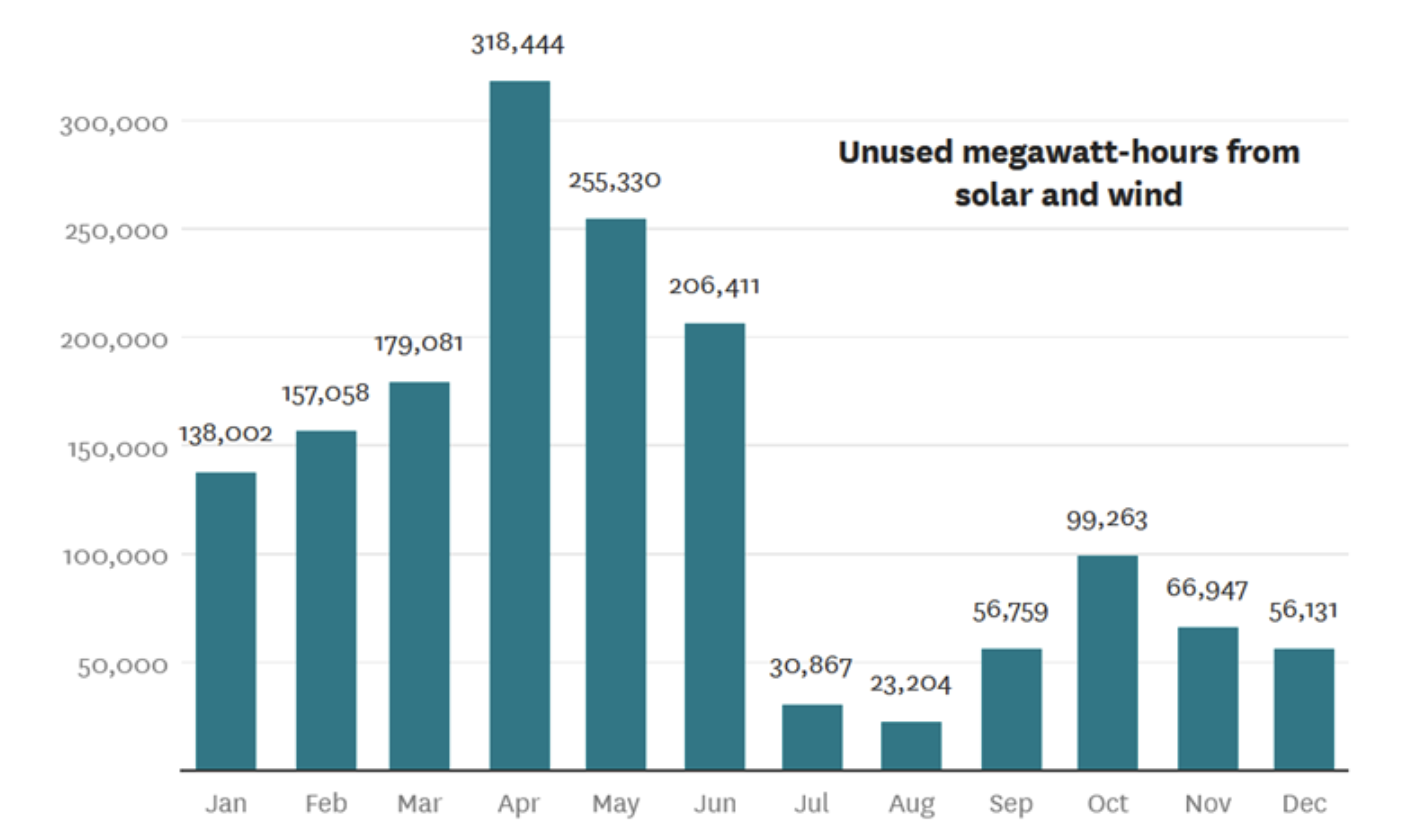 The level of EV charger will likely effect how clean EV charging is and how it impacts the grid. The faster the charging, the easier it is to schedule during the desired daytime window, 10am to 2pm, or as close to this window as possible.

If you charge your EV with a Level 1 charger, which is the slowest and done via a normal 120V wall outlet, you will likely increase your energy and grid usage at every hour of the day, because Level 1 charging takes so long. If you live in California or another state that generates a lot of solar energy, you’ll therefore exacerbate the duck curve and peak grid usage issues. Instead, EV charging should be focused on filling the belly of the duck and avoiding grid exacerbations at other times of the day.

As an example, last weekend I attempted to charge my EV, which needed about 125 miles of charging, via a Level 1 charger starting at 9am on a Saturday. My vehicle notified me that the battery would be fully charged at 5pm the following day. That would have been 32 hours of constant charging in order to gain the 125 miles of charge. I would be able to charge the same amount in less than 5 hours on a Level 2 charger, and in only 45 minutes on a Level 3 charger, which is the fastest.

A more detailed breakdown shows the charging times for my Chevy Bolt LT on each level of charger:

The reality is that 90% of vehicles are driven less than 40 miles a day. Given that it takes roughly an hour to charge 30 miles on a Level 2 charger, charging between 10am and 2pm is extremely doable — even allowing for multiple EVs to charge per port during that timeframe. Of course, given the long range of most EVs, most people can simply charge once per week during weekend daytime hours, when the energy is the cleanest. 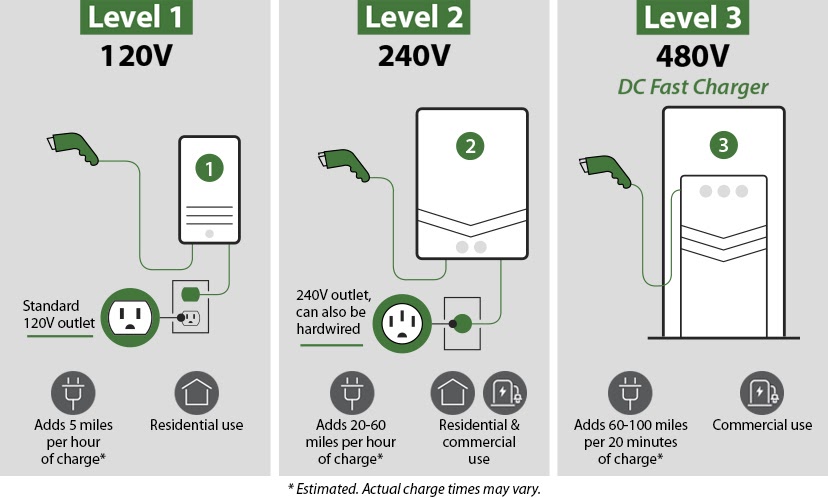 As illustrated here, residential Level 1 EV charging is expected to exacerbate grid issues, by significantly increasing the head-of-the-duck evening and nighttime charging. While Level 2 charging shows similar impacts, the Level 2 issues can be remedied by rate tariff adjustments and general education of EV owners. Also clear from the graphs is that expanding workplace and public access charging opportunities will facilitate daytime charging, especially when it is done with Level 2 and Level 3 chargers. As illustrated, Work Level 2, Public Level 2, and Fast Charging are all expected to increase load profiles during the peak solar hours of 10am–2pm.

Optimal times to charge an EV in California

For the lowest CO2 emissions, and to save ratepayers the exorbitant costs of utility investments in the transmission grid, follow these guidelines for charging your EV in California:

Best days: Saturday and Sunday (again, 10am–2pm or as close as possible to this timeframe)

Best levels: Whatever speed of charging allows alignment with midday charging, especially on the weekends. 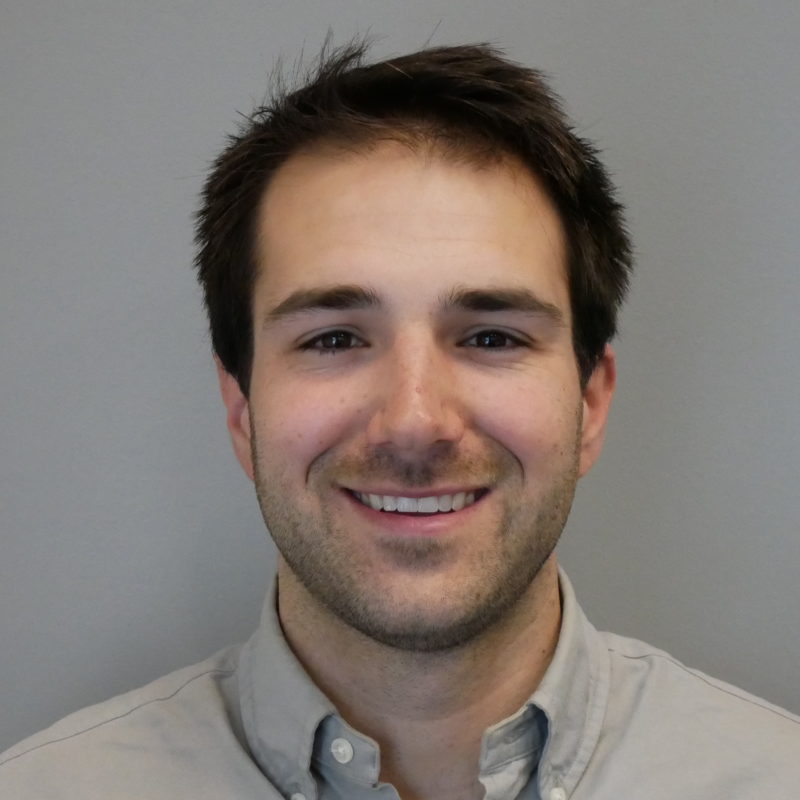