Executive Director Craig Lewis presented at this one-hour webinar, which took place on 5 November 2020 at 9am PT.

Although everyone understands that there is significant value to the resilience provided by indefinite solar-driven backup power, quantifying this unparalleled value-of-resilience (VOR) has been a challenge that has limited market opportunities for Solar Microgrids.

To overcome this challenge, the Clean Coalition has developed a standardized, straightforward VOR methodology, referred to as VOR123, which reflects the fact VOR has different values based on three load tiers. Importantly, VOR123 can be applied to any type of facility by tiering loads and then applying a standardized VOR for each. There are three load tiers as follows: 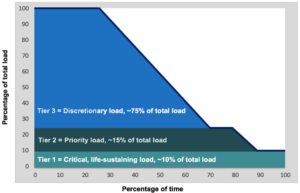