In partnership with the DignityMoves organization, the Clean Coalition produced a Solar Microgrid design for transitional housing featuring standardization of the solar, energy storage, and load management elements, establishing a baseline for Solar Microgrids to be easily deployed across all types of modular housing facilities.

With the increasing frequency of disasters, awareness is growing quickly that energy resilience is vital for communities everywhere. The benefits of Solar Microgrids are also on full display, and at the very least, Solar Microgrids should be deployed at Critical Community Facilities (CCFs) to ensure unparalleled resilience for essential services during grid outages of any duration – along with delivering overall economic and environmental benefits.

The Clean Coalition facilitates Solar Microgrid and Community Microgrid projects that can be replicated anywhere. By showcasing the feasibility of these projects, and the vast potential for siting distributed energy resources in the built environment, we help proliferate clean local energy and community resilience. The Clean Coalition bases its work on concrete project experience – and helps to innovate policies that often impede these projects.

In addition, based on the Clean Coalition’s economic analyses, transitional housing sites can save hundreds of thousands of dollars in bill savings by deploying standardized Solar Microgrids, in addition to benefiting from the VOR.  In total, the Solar Microgrid at DignityMoves Santa Maria is anticipated to provide value of at least $700,000 – above and beyond the cost of the Solar Microgrid.

The remainder of this piece goes into the details of the DignityMoves Santa Maria Solar Microgrid feasibility study process and the resulting standardized Solar Microgrid design.

DignityMoves works to end homelessness in communities by building Interim Supportive Housing with rapid, cost-effective, scalable solutions. DignityMoves was founded by a group of concerned business leaders who are all members of Young Presidents Organization (YPO). Already frustrated with the state of unsheltered homelessness in communities, they pooled their collective expertise and resources to take a fresh look at the situation and find innovative solutions. Thus, at DignityMoves everyone gets the dignity of their own private space, and most importantly, exceptional services to provide the wrap-around support necessary to help clients make positive steps forward.

This project for DignityMoves is based on the Clean Coalition’s established Solar Microgrid design and optimization methodology that features energy resilience for essential services. The resilience goal is to enable indefinite operations of the most critical loads, while keeping all loads operational for a significant percentage of time. This resilience would be provided when the grid is down for any reason, including from Public Safety Power Shutoff (PSPS) events, and more importantly, from actual disasters that require weeks or longer to restore grid service. The design will also include standardized replicability for the Solar Microgrid components utilizing the pre-manufactured & kitted “pop-up” housing structures, so that these Solar Microgrids can apply to all types of modular housing units. The Solar Microgrids will also reduce the DignityMoves energy costs at all locations.

The scope and deliverables for the Solar Microgrid project at the DignityMoves Santa Maria facility were as follows:

In order to complete the standardization of the Solar Microgrid components for the temporary units, the Clean Coalition conducted the following steps:

The Clean Coalition conducted this study by utilizing its proven methodology for analyzing energy resource and resilience solutions on behalf of communities, featuring the following five steps:

These five steps are diagrammed below: 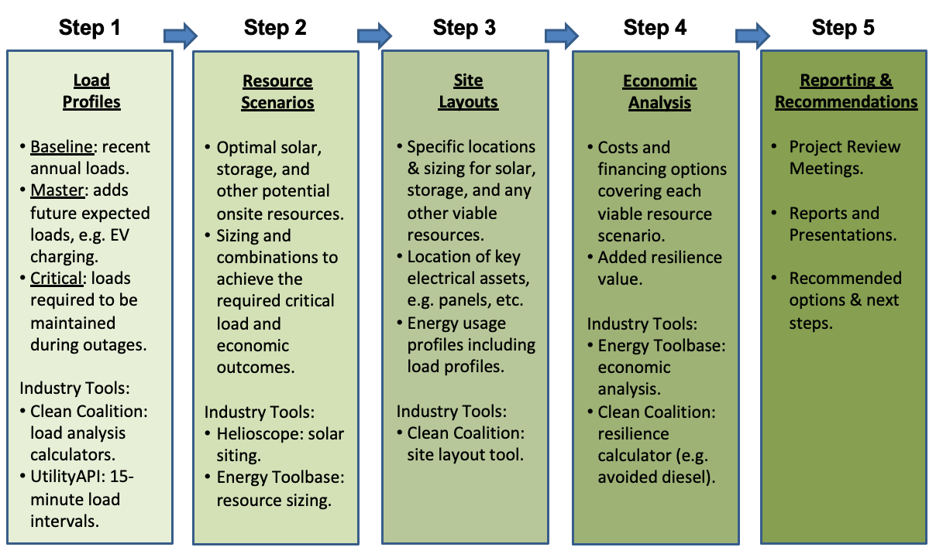 Following is the site plan for the DignityMoves Santa Maria location: 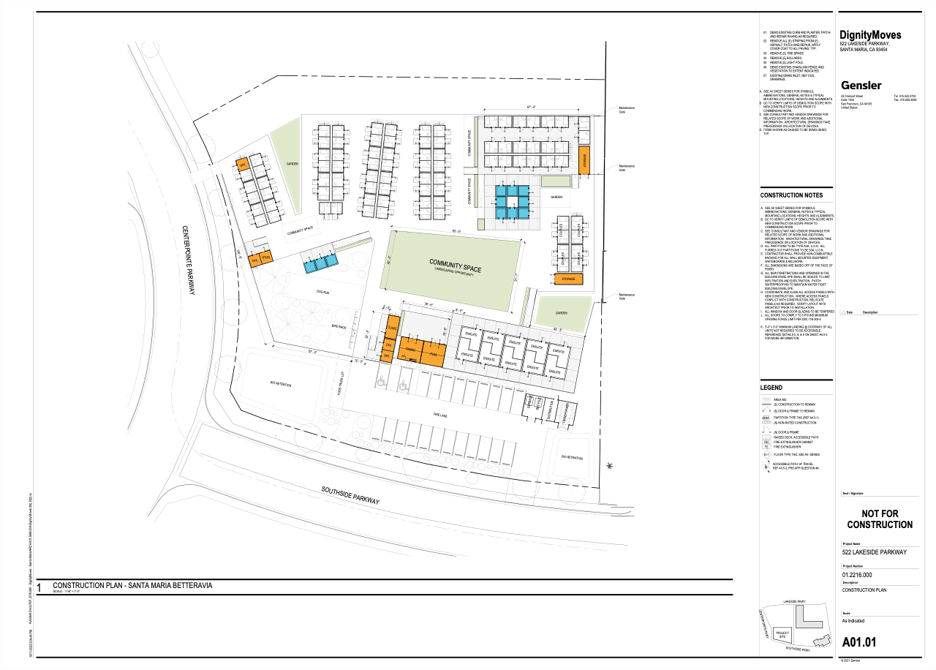 All the typical residential units will be provided by Boss Cubez, with the Ensuites provided by LifeArk along with the bathroom and shower units. The site will be 100% electric, and thus a Solar Microgrid that achieves net-zero can will eliminate the site’s operational emissions. Construction for this site is planned to start in January or February 2023 and completed around June 2023, with the standardized Solar Microgrid components installed and operational along with the site completion.

Boss Cubez and LifeArk visuals for their housing are provided below, as examples: 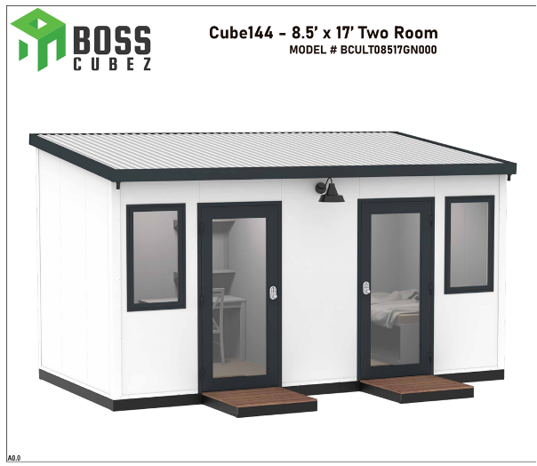 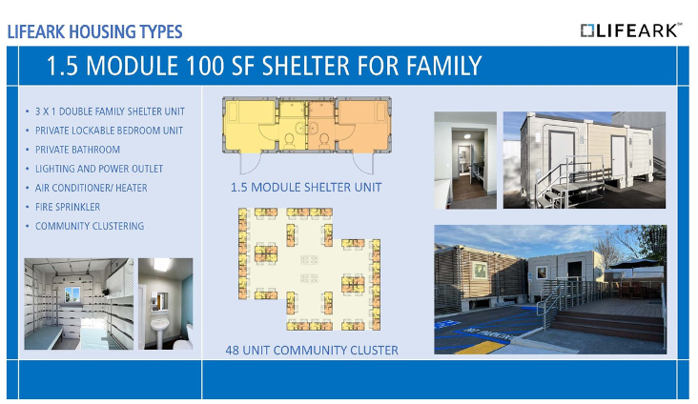 Note that there is no EV charging planned for the Santa Maria site, and thus EV charging profiles were not included in the Master Load Profile. However, the Clean Coalition strongly recommended specific Hot Water Heat Pumps for this site, and for all transitional housing sites, since they substantially reduce the amount of load required to heat water at any location – and thus helping achieve an optimal outcome for the sizing and cost of the Solar Microgrid while lowering the cost of energy used at a site by a significant amount.

The critical load tiers are defined as follows:

Note that for the DignityMoves Santa Maria scenario utilizing two Battery Energy Storage containers when on-grid, the total percentage of Tier 1 loads kept on indefinitely is 35%, so much higher than the 11.4% applied to LifeMoves Mountain View.

The standardization design of the Solar Microgrid components for the transitional housing units at DignityMoves Santa Maria, and that applies to all similar transitional housing units, includes both an off-grid scenario with four HomeGrid battery containers (and an option for a diesel generator) and an on-grid scenario with two HomeGrid battery containers. The HomeGrid battery containers are a modular system that can be sized appropriately per site and easily moveable from site to site, as needed. The Solar kitting is to be provided separate from the transitional housing structure kitting – both kits can be delivered to the Santa Maria site at the same time with the parking lot used to stage the kits. The Boss Cubez basic units will have 2 panels; blocks will always use 2-panels per unit – e.g. 10 solar panels total for 5 housing units in a block. Aspects such as wiring would be revised as needed for re-installation at other sites.

Following are the standardization components: 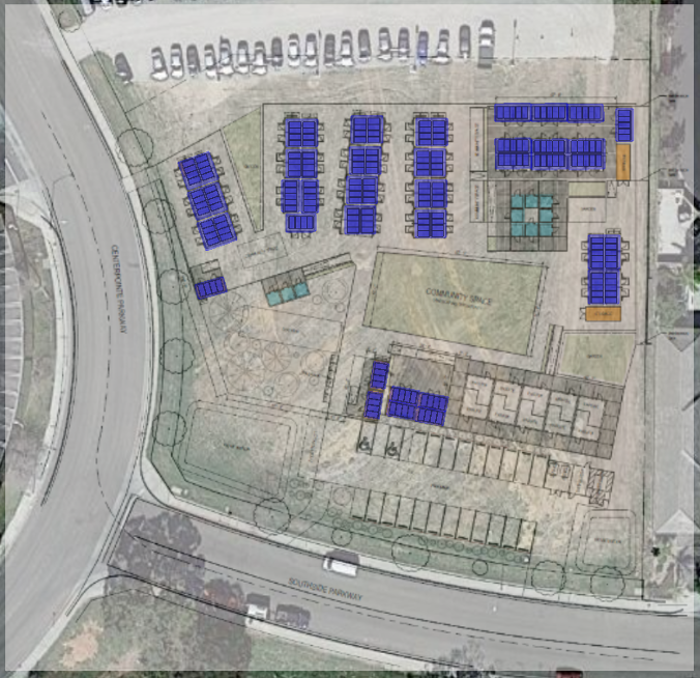 Following are the solar standardization designs for the Boss Cubez units: 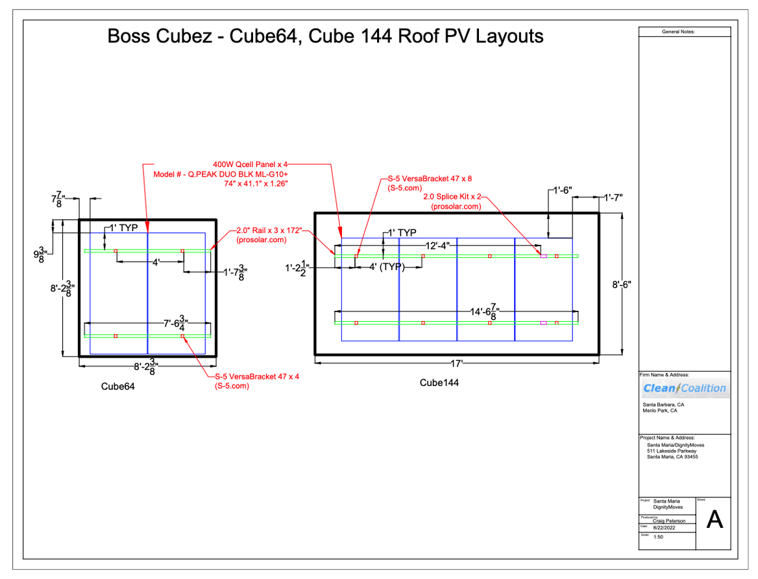 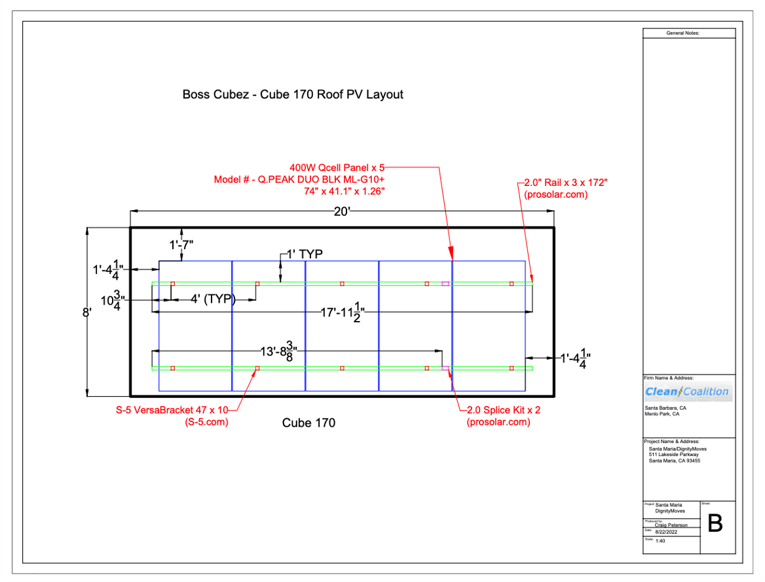 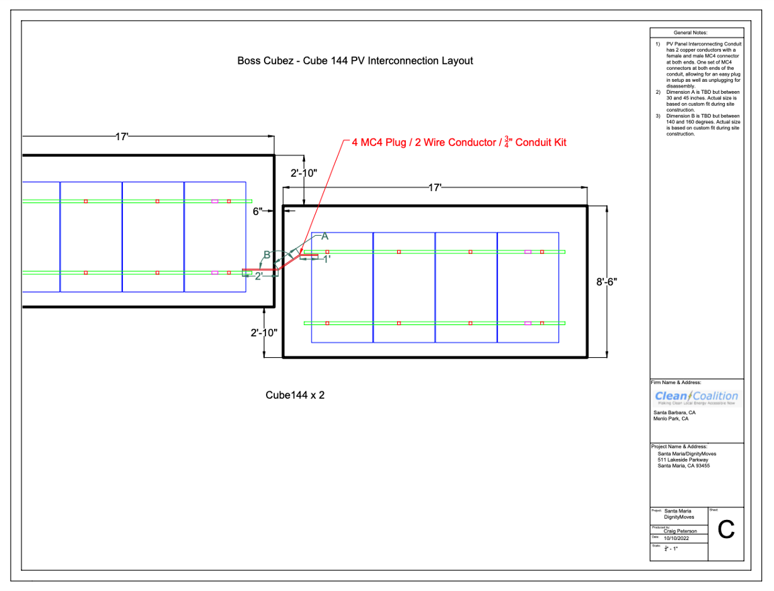 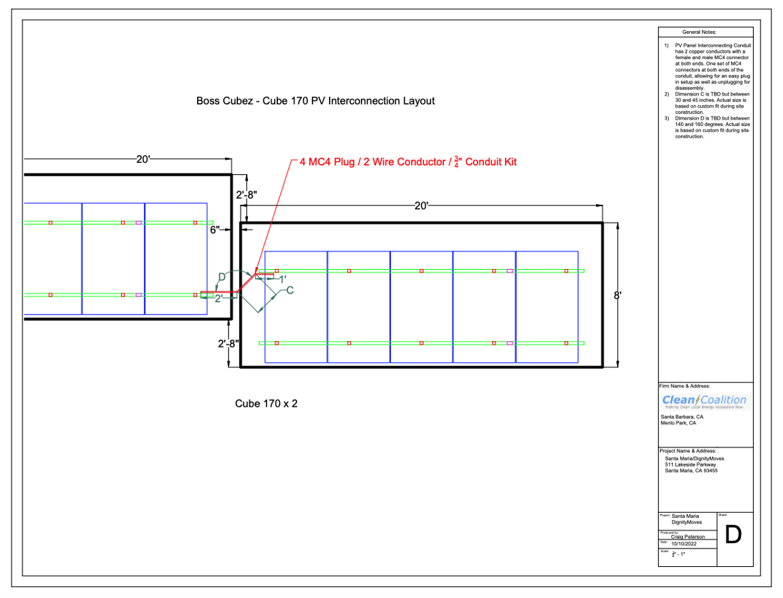 This solution would use SolArk inverters with 36 Qcell 400W solar panels per Sol-Ark inverter, and with each SolArk inverter interconnected with and managing the HomeGrid batteries per the diagram below: 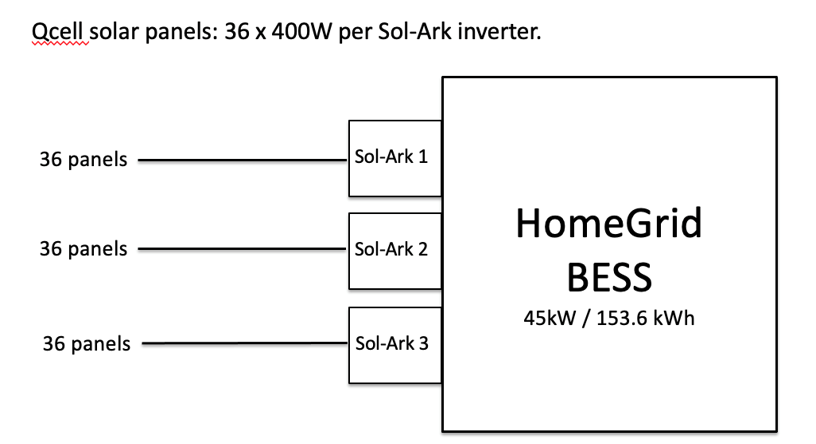 Thus, the system diagram for the Santa Maria site is as follows, including key notes: 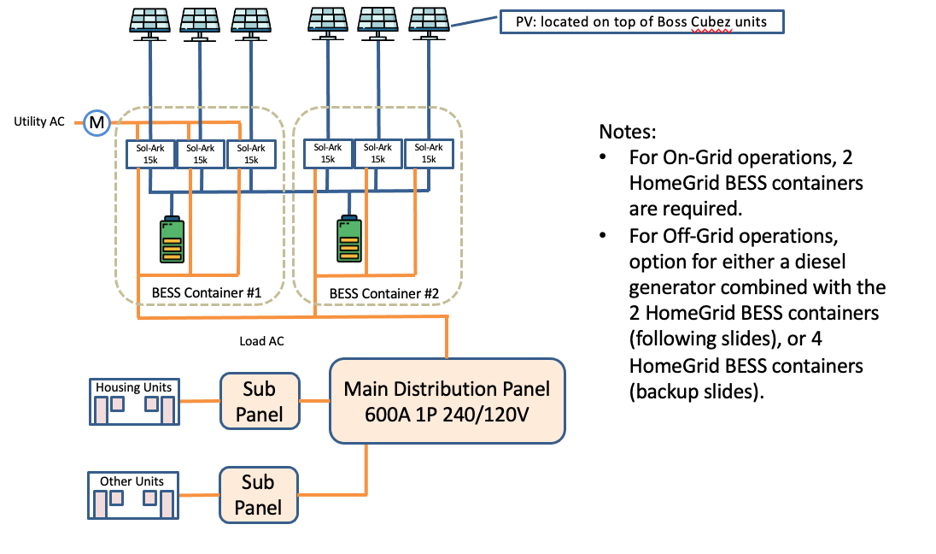 Key details regarding the HomeGrid Powercube Series batteries are as follows: 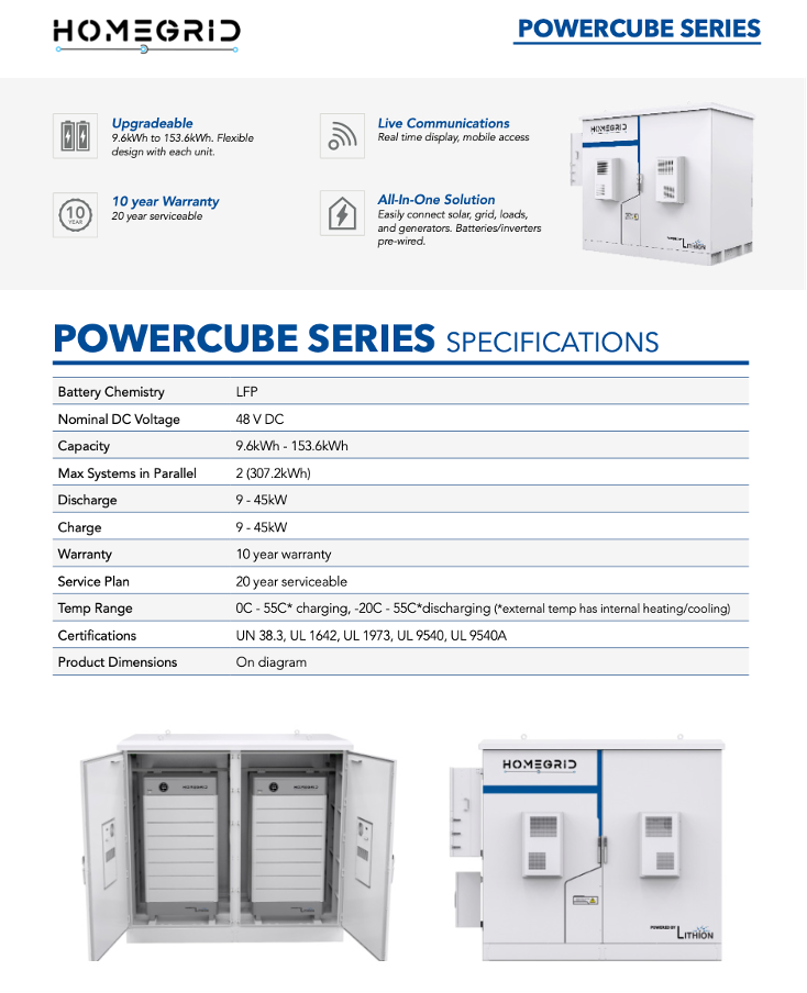 The Clean Coalition’s economic analysis of the standardized Solar Microgrid for the DignityMoves Santa Maria location resulted in hundreds of thousands of dollars in savings for DignityMoves over a 25-year period – and this will apply for all sites where this standardized solution is deployed. The results for both a cash purchase option and a Power Purchase Agreement (PPA) option are provided below: 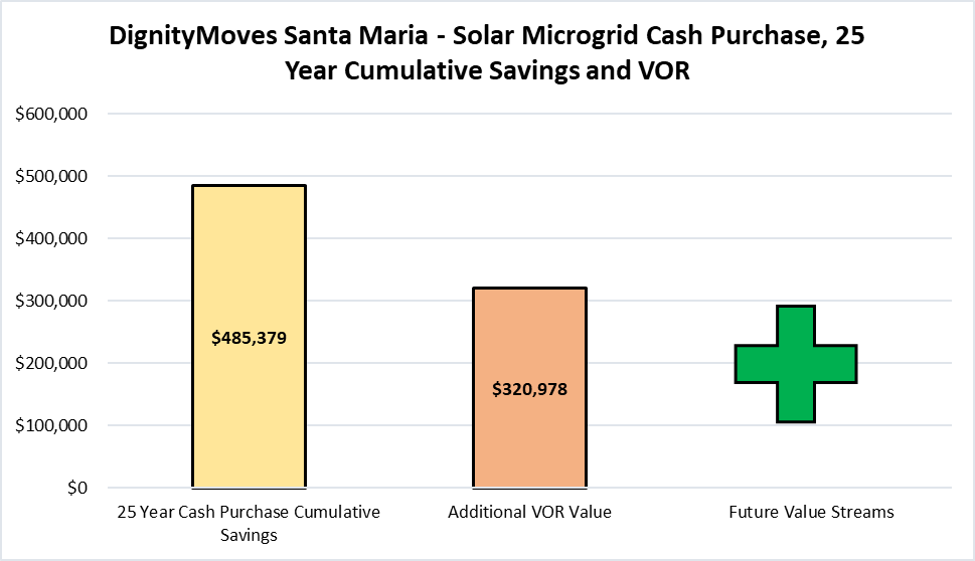 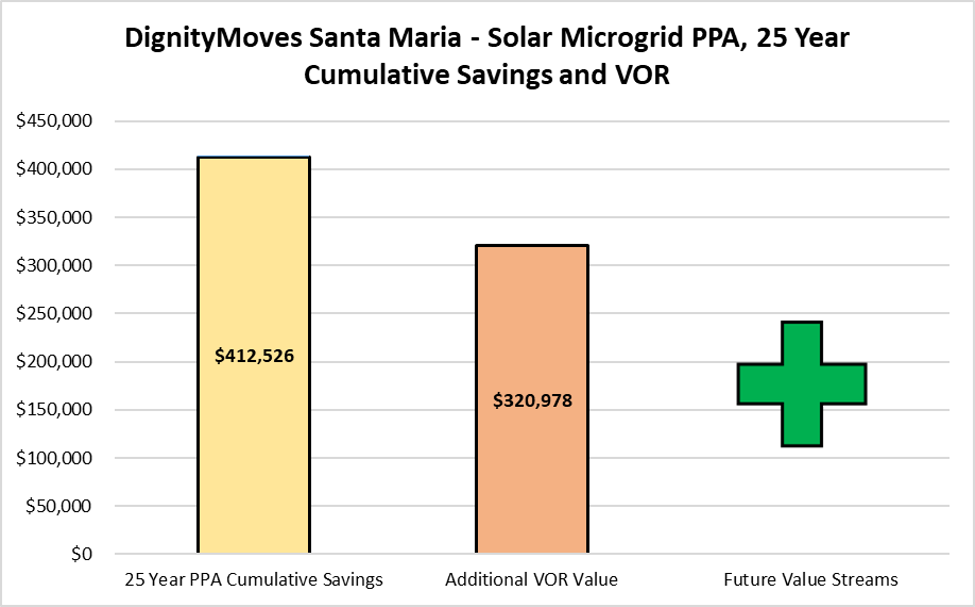 The above economic analysis demonstrates that transitional housing sites can save many hundreds of thousands of dollars by deploying these standardized Solar Microgrid systems for their transitional housing units, while also benefiting from additional value – the Value of Resilience (VOR) these solutions provide – typically valued as a 25% adder to the total utility bill and estimated here as over $300,000 in added benefits – thus achieving over $700,000 in economic value for similar sized transitional housing locations.

This feasibility study with the standardized design that the Clean Coalition completed for DignityMoves provides a solution for transitional housing everywhere, delivering an unparalleled trifecta of clean energy, critical resilience, and significant cost savings. As a standardized solution, this applies to all transitional housing sites that utilize this Solar Microgrid system.

The Clean Coalition also completed a Solar Microgrid feasibility study for another DignityMoves site, this one with permanent housing planned for Rohnert Park, CA. This project demonstrated the same substantial clean energy, resilience, and cost savings benefits – providing the transitional housing planned for this site with Net Zero Energy, indefinite resilience for all mission-critical Tier 1 loads with substantial support for Tier 2 priority loads, and over $400,000 in net utility bill savings utilizing a PPA financing option with no upfront cost for DignityMoves – demonstrating yet again that Solar Microgrids provide the answer for Community Resilience, as well as decarbonization goals and significant cost savings. 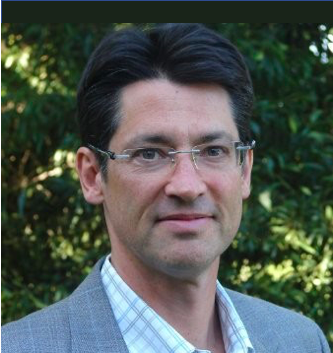 
Greg rejoins the Clean Coalition following a prior stint as Director of Programs and leading foundational Clean Coalition efforts, including the establishment of the Community Microgrid initiative and developing methodologies for optimizing high penetrations of local solar within the distribution grid. Greg has also served as Director of Product Management at Sunrun, helping establish a Virtual Power Plant (VPP) platform to aggregate solar+storage into Solar Microgrids that provide both customer and grid benefits. Prior to transitioning into clean energy, Greg served in executive roles for multiple technology startups that achieved successful industry-wide deployments and investment outcomes, including via an IPO and a major acquisition.  Greg’s role as Vice President of Advanced Product Development at Comcast prepared him for the Monitoring, Communications, and Control (MC2) elements that are fundamental to Solar Microgrids and Community Microgrids.  Greg’s academic background in the arts has combined with highly technical work experience to achieve impressive results that include major grant awards for the Clean Coalition from the California Energy Commission (CEC) and a New York Prize grant.