By Craig Lewis and Angeline Foshay

As part of our Goleta Load Pocket Community Microgrid (GLPCM), the Clean Coalition has made strides in advocating the need for indefinite renewables-driven backup power throughout the Santa Barbara region. This effort extends to the entire Goleta Load Pocket (GLP), a 70-mile stretch of California coastline from Point Conception to Lake Casitas, encompassing the cities of Goleta, Santa Barbara (including Montecito), and Carpinteria — and the entire portion of Santa Barbara County that is served by Southern California Edison (SCE).

For the GLPCM to become a reality and provide unparalleled economic, environmental, and resilience benefits, several local policy barriers must be removed.

This can be done in conjunction with the County of Santa Barbara’s Strategic Energy Plan (SEP), which seeks to catalyze the adoption of solar and storage technologies throughout the County. When the SEP was presented to the Santa Barbara Board of County Supervisors in September, the Clean Coalition submitted written comments and made public comments that offered key solutions to unlock the renewable energy potential for the GLP. Now that the plan has passed by a 4-1 vote, the Clean Coalition will continue to push for the below inclusions during the SEP’s implementation. 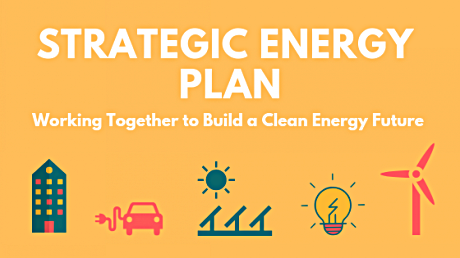 Changing the definition of utility-scale solar

The Clean Coalition advocates for a definitional change that does not categorize solar facilities constructed on rooftops, parking lots, and parking structures as utility-scale, regardless of their size. This simple definitional change will unlock the potential for wholesale distributed generation, or WDG (often commercial-scale solar), and front-of-the-meter (FOM) projects within the GLP.

The Naval Exclusion Zone that covers the entirety of Santa Barbara County’s coastline poses an obstacle to any potential renewable energy projects onshore or offshore. The Clean Coalition advocates that solar projects on built environments throughout the coastal zone be allowed to proceed without a Coastal Development Permit, provided they are compliant with all other county code provisions. The Coastal Zone Ordinance, which currently allows onshore and offshore natural gas projects, should also be amended to allow for onshore and offshore wind developments.

The Clean Coalition is pressing the County to conduct a Solar Siting Survey as part of the SEP’s implementation, to take full stock of the clean energy potential available in the area. This will allow the County to determine the solar siting potential not only of its own properties but also of critical facilities within the community. The Clean Coalition’s Solar Siting Surveys have identified significant commercial-scale solar siting potential on built environments, even in densely populated urban areas. The recent Solar Siting Survey for the City of San Diego is an excellent example.

The County’s SEP implementation plan includes developing an Energy Assurance Plan (EAP) with contingencies for natural disasters and Public Safety Power Shutoffs (PSPS). For the south County region and the GLP to secure indefinite renewables-driven backup power, the Clean Coalition estimates that 200 megawatts (MW) of solar and 400 megawatt-hours (MWh) of energy storage need to be developed. Including these targets for energy resilience within the County’s EAP is essential to protecting the GLP during a complete transmission outage (“N-2 event”). The 200 MW of solar represents about five times more solar than is currently deployed in the GLP and will require about 7% of the available built environment space on rooftops, parking lots, and parking structures

Another component that should be included in the EAP to increase GLP energy resilience is the installation of grid-isolation switches, which will require cooperation from Southern California Edison (SCE). The Clean Coalition encourages the County of Santa Barbara to pressure both SCE and their new community choice aggregator (CCA), Monterey Bay Community Power, to assist in developing renewables-driven microgrids through grid upgrades and programs like the Microgrid SmartConnect Program.

The Clean Coalition supports the creation of a Feed-In Tariff (FIT) for unleashing solar and solar+storage on built environments. FITs provide a standardized, long-term, guaranteed contract that allows commercial-scale projects to sell power to the local utility or other load-serving entity, such as a CCA.

The County’s SEP mentions utilizing a FIT to deploy clean local energy, and the Clean Coalition recommends that the FIT include Market-Responsive Pricing and a Dispatchability Adder. These mechanisms will ensure a lower procurement cost for solar projects and will help encourage the incorporation of energy storage, while also protecting ratepayers. Furthermore, the County should pressure SCE to establish a FIT for critical facilities within the GLP. A FIT eliminates cost and risk barriers associated with participating in solicitation processes, which preempt commercial-scale projects due to the $150,000 minimum average cost per MW to participate in a solicitation process — and assume the high risk of losing. On average in California, utility solicitation programs have 97% failure rates.

The recent FIT design for the City of San Diego provides an ideal example.

The Clean Coalition supports any actions to streamline the existing permitting processes, including pre-approval of clean local energy projects on built environments. Incorporating online permitting processes for these types of projects would likely result in significant improvements. The potential for virtual inspection of projects on built environments should also be explored. Additionally, establishing an independent commission made up of neighboring Authorities Having Jurisdiction (AHJ) and members of the local solar+storage industry would help to determine proper guidelines for the County.

For more on the GLPCM, see our previous blog posts: