The 40 MWh VESR project is setting the stage for lots more energy storage and solar-driven resilience for the grid-constrained Santa Barbara region.

Final approvals were received in mid-August 2020 for the Vallecito Energy Storage Resilience (VESR) Project in Carpinteria, California — the first 40 MWh of front-of-meter (FOM) energy storage of the 280 MWh that Southern California Edison (SCE) proposed and the California Public Utilities Commission (CPUC) approved to come online in the area by the middle of 2021. The Commercial Operation Date (COD) for VESR is expected in December, just a few months after receiving final approvals, which were necessary for actual construction to begin.

VESR, one of the winners of SCE’s local capacity requirements RFP, was awarded a 20-year Energy Storage Resource Adequacy Agreement by SCE and is staged to provide significant additional grid services.

The Clean Coalition was instrumental in facilitating the project through community outreach and key approvals through Santa Barbara County. We helped build community support for VESR by aligning organizations including the Carpinteria Unified School District, Carpinteria Valley Association, Community Environmental Council, Sierra Club, IBEW 413, and many other important entities. In addition, we provided informative filings and commentary at Planning Commission and Board of Supervisor meetings.

VESR will serve as a model that supports Santa Barbara County’s emissions reduction goals, increases the County’s energy resilience, drives regional economic development, and optimizes the performance and cost-effectiveness of the electricity grid.

Setting the stage for more resilience in the GLP

VESR will provide foundational resilience to the portion of Santa Barbara County served by SCE — a highly transmission-vulnerable and disaster-prone area known as the Goleta Load Pocket (GLP). The GLP spans 70 miles of Southern California coastline, from Point Conception to Lake Casitas, encompassing the cities of Goleta, Santa Barbara (including Montecito), and Carpinteria.

The Clean Coalition has determined that to achieve indefinite renewables-driven backup power that provides 100% protection to the GLP against a complete transmission outage, 200 megawatts (MW) of solar and 400 megawatt-hours (MWh) of energy storage needs to be sited within the GLP. By itself, VESR represents a full 10% of the energy storage needed to achieve this goal. The Goleta Load Pocket Community Microgrid (GLPCM), which is being staged with this 100% resilience goal in mind, will bring the area unparalleled economic, environmental, and resilience benefits.

In addition to moving forward resilience for the larger GLP, VESR provides the energy storage foundation for a potential future Carpinteria Community Microgrid. VESR will set the stage for the four additional utility-scale battery projects that are expected to come online within the GLP by March 2021. One of these is expected to be located about a quarter mile from VESR, providing further potential for a Carpinteria Community Microgrid. Together, these five battery storage projects account for 70% of the 400 MWh that is needed for 100% resilience in the GLP, when combined with 200 MW of additional solar.

A Carpinteria Community Microgrid would include critical community facilities like the Carpinteria High School — an official Red Cross emergency sheltering site — the Fire District, and the Sheriff’s Department, as well as other nearby commercial-scale rooftops, parking lots, and parking structures. VESR stages solar-driven resilience with potential for more than 3 MW of solar siting at the Carpinteria High School, similar to the Solar Microgrids now being staged at schools throughout the Santa Barbara Unified School District. 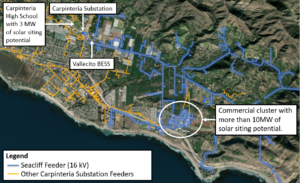 With its approval by the Santa Barbara County Planning Commission in late February 2020, VESR has already helped to pave the way for quicker adoption of future projects. A subsequent Planning Commission meeting for another energy storage project, the Painter Battery Energy Storage System, required almost no discussion.

Benefits to the Goleta Load Pocket and Santa Barbara County

SCE stated in its Local Capacity Requirements (LCR) Request for Proposal that due to the mountainous terrain traversed by the single transmission pathway serving the GLP, which originates in Ventura County 40 miles away, any required repair and replacement of transmission infrastructure could take up to several weeks after natural disasters like fires, landslides, and earthquakes. Local energy storage projects like VESR are crucial to improving the resilience of the GLP.