Keeping the lights on after natural disasters - Clean Coalition

Keeping the lights on after natural disasters

Solar energy is no longer an amenity for just the wealthy. The next growth area for solar should be Solar Emergency Microgrids for communities.

Solar energy is no longer just a nice-to-have amenity that only the wealthy can afford. Now that the price of solar has fallen 70% since 2010, solar is available to more people for more applications. The next growth area for solar should be Solar Emergency Microgrids.

A Solar Emergency Microgrid is a microgrid with four basic components: solar, energy storage, demand response, and monitoring, communications, and control to optimize operation of all the components. A Solar Emergency Microgrid is linked to the main electric grid, but during a power outage it can isolate and keep running, providing indefinite backup power for critical loads at priority facilities, such as police and fire stations, emergency operations centers and shelters, hospitals, and critical communications and water infrastructure. 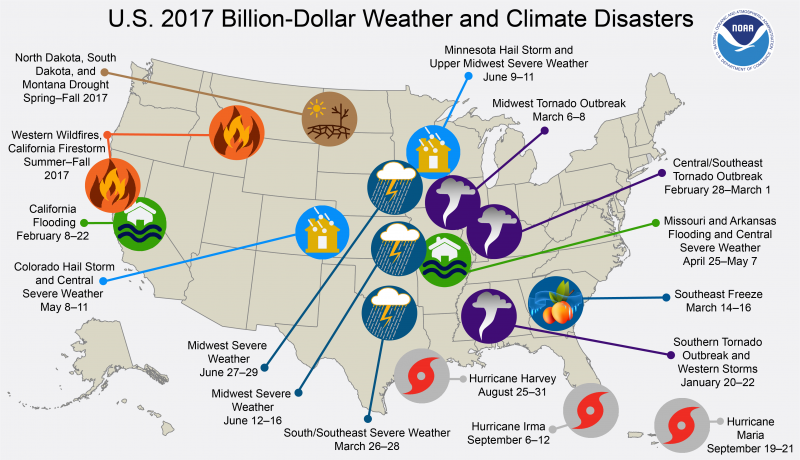 Why we need Solar Emergency Microgrids

The spate of natural disasters in the U.S. in 2017 drove home the need for communities to be more resilient. Wildfires in California, and hurricanes in Texas, Florida, and Puerto Rico, showed the value of having energy systems that can function when the grid is down.

Diesel backup generators commonly used for backup power after natural disasters present a host of problems. They are noisy, create noxious air pollution, and are difficult to deliver quickly to an area that has just been hit by a natural disaster. The fuel needed for these generators often runs out before power is restored to an area. Our communities deserve to have energy supplies that don’t fail them when they are most needed. Solar Emergency Microgrids provide immediate and ongoing backup power to provide basic services to communities.

The Hoover School is already designated as a Red Cross emergency shelter. This school, which serves 700 students, has a multi-use room that can be filled with sleeping cots if needed, a large open field for assembly, a cafeteria for food preparation, and large roof areas and parking lots for solar.

These are the three Solar Emergency Microgrid scenarios PAEC modeled for Hoover, all of which could handle short-term (minutes), medium-term (hours), or long-term (days) power outages:

Scenario 1 would provide 87.4 kilowatts (kW) of solar PV and 29 kW/60 kilowatt-hours (kWh) of energy storage. This assumes the battery is an asset in continuous use.

Scenario 2 would provide the same amount of solar PV (87.4 kW DC) and more energy storage (29 kW/120 kWh), as well as 10 Level 2 EV chargers. This scenario assumes about half of the EV chargers will be used at any given time between 8am and 3pm, and that those charging their EVs will pay for electricity.

Cool things this scenario does: As well as shifting load from peak demand time to off-peak time, this scenario also provides EV charging. Interestingly, there are reports of teachers running extension cords out their classroom windows to charge their EVs. Installing EV charging stations would provide a safer alternative for this in-demand amenity.

This scenario varies a bit from the other two. A Solar Emergency Microgrid that would provide indefinite power to a long-term shelter would be sized smaller than those in scenarios 1 and 2 but would still provide 21% of the school’s normal energy load. This scenario would include 25 kW solar DC and 4 kW/135 kWh energy storage.

Cool thing this scenario does: Enough power is provided to run the school’s lighting and refrigeration indefinitely, during normal operations and during a power outage.

More than just the right thing to do

We know that solar power helps move us toward the clean energy future that will reduce greenhouse gas emissions and address climate change. But Solar Emergency Microgrids offer much more than that. They also offer economic and resilience benefits to communities:

As the number and severity of natural disasters continues to increase, we need to invest in more resilient energy systems. According to The Economist, since the 1970s, the number of disasters worldwide has more than quadrupled to around 400 a year. Insurance companies are nervous because the liabilities on their balance sheets have been increasing and are expected to continue increasing. Munich Re, a German company that insures insurance companies, compiled a list of hydrological events and found there are six times more hydrological events now than in 1980.

As the world faces more extreme weather, the ability of our communities to bounce back will depend partly on the quality of our energy systems. Large, centralized power plants that burn fossil fuels inefficiently and distribute electricity over long distances are vulnerable at many points. The opposite of vulnerability is resilience. Our communities deserve smaller-scale, resilient, clean energy systems. Installing Solar Emergency Microgrids at our hospitals, emergency response centers, and emergency shelters to run critical loads is the place to start.

PAEC is a groundbreaking initiative to streamline policies and showcase projects that facilitate local renewables and other advanced energy solutions like energy efficiency, energy storage, and electric vehicle charging infrastructure. PAEC will create pathways to cost-effective clean local energy and community resilience throughout San Mateo County, the City of Palo Alto, and beyond. PAEC is a collaboration between the Clean Coalition, the California Energy Commission, Pacific Gas and Electric, and an array of municipalities, emergency response jurisdictions, schools and universities, and corporate entities. For more information, please visit www.clean-coalition.org/PAEC.